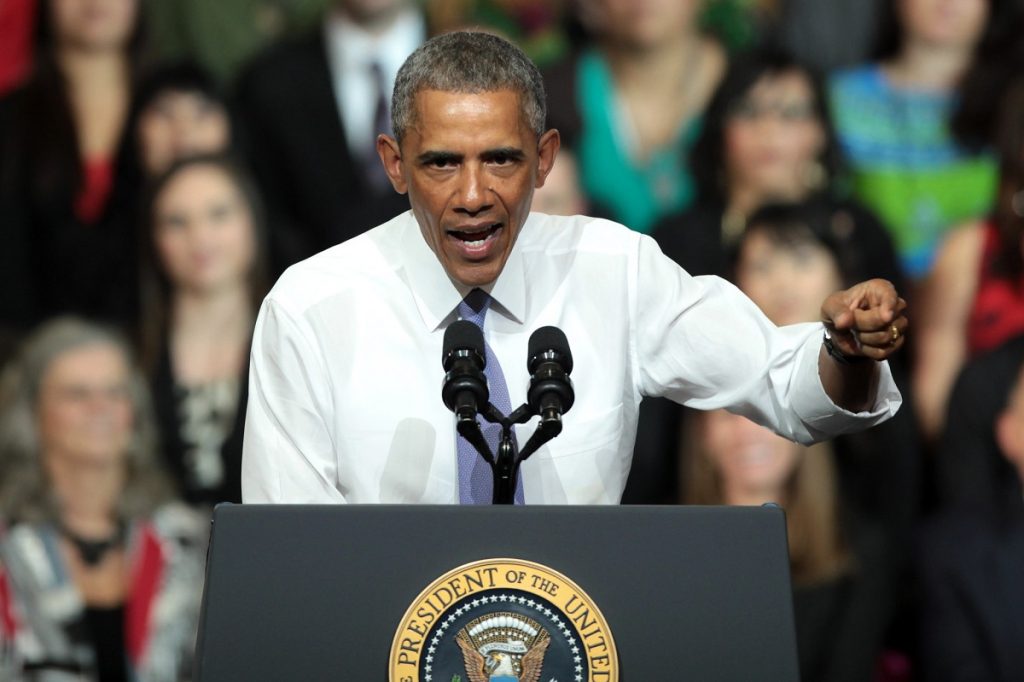 Barack Obama is engaging in another war of words with Donald Trump.

That didn’t go well for Democrats when Obama was President.

And what Barack Obama just said about Trump gave every Democrat one painful flashback.

Barack Obama let loose on Donald Trump with a series of insults he may live to regret.

In left-wing journalist Edward Isaac-Dovere’s new book “Battle for the Soul: Inside the Democrats’ Campaigns to Defeat Trump,” Dovere goes into great detail for the first time how viciously Barack Obama attacked Donald Trump behind closed doors during the 2020 election.

“He’s a madman,” Obama told a group of donors.

Obama shredded Trump in more personal terms attacking the President as a bigot.

“More often: ‘I didn’t think it would be this bad.’ Sometimes: ‘I didn’t think we’d have a racist, sexist pig.’ Depending on the outrage of the day … a passing ‘that fucking lunatic’ with a shake of his head,” Dovere wrote.

Obama’s held a grudge against Trump for years.

Trump rose to political prominence by touting the theory Obama was born in Kenya.

In 2011, Obama finally put that talk to rest by producing his long form birth certificate.

At the White House Correspondents’ Association Dinner, Obama performed a comedy set that included several scathing jokes about Trump with Trump in attendance.

Obama tore into Trump that night mocking Donald Trump as a conspiracy theorist.

“And I know just the guy to do it -– Donald Trump is here tonight!  Now, I know that he’s taken some flak lately, but no one is happier, no one is prouder to put this birth certificate matter to rest than the Donald.  And that’s because he can finally get back to focusing on the issues that matter –- like, did we fake the moon landing?  What really happened in Roswell?  And where are Biggie and Tupac?” Obama mockingly asked the crowd of journalists and Washington bigwigs that roared in approval.

At the time, Trump was flirting with entering the 2012 Republican presidential nominating contest and polls showed Trump in first place.

“But all kidding aside, obviously, we all know about your credentials and breadth of experience.  For example — no, seriously, just recently, in an episode of Celebrity Apprentice — (laughter) — at the steakhouse, the men’s cooking team cooking did not impress the judges from Omaha Steaks.  And there was a lot of blame to go around.  But you, Mr. Trump, recognized that the real problem was a lack of leadership.  And so ultimately, you didn’t blame Lil’ Jon or Meatloaf.  You fired Gary Busey.  And these are the kind of decisions that would keep me up at night.  Well handled, sir. Well handled,” Obama added.

Obama and his supporters were thrilled with the performance.

They thought it put to rest the conspiracy theory about Obama’s place of birth and chopped Trump down to size and killed his political prospects.

But by many accounts Obama’s mockery only served to motivate Trump to run for president in 2016.

After Trump won the election, Trump made it his mission to erase every vestige of Obama’s legacy as President.

Dovere reporting the blistering terms in which Obama attacked Trump during the 2020 election may have a similar boomerang effect and possibly spur Trump to mount a comeback presidential campaign in 2024.