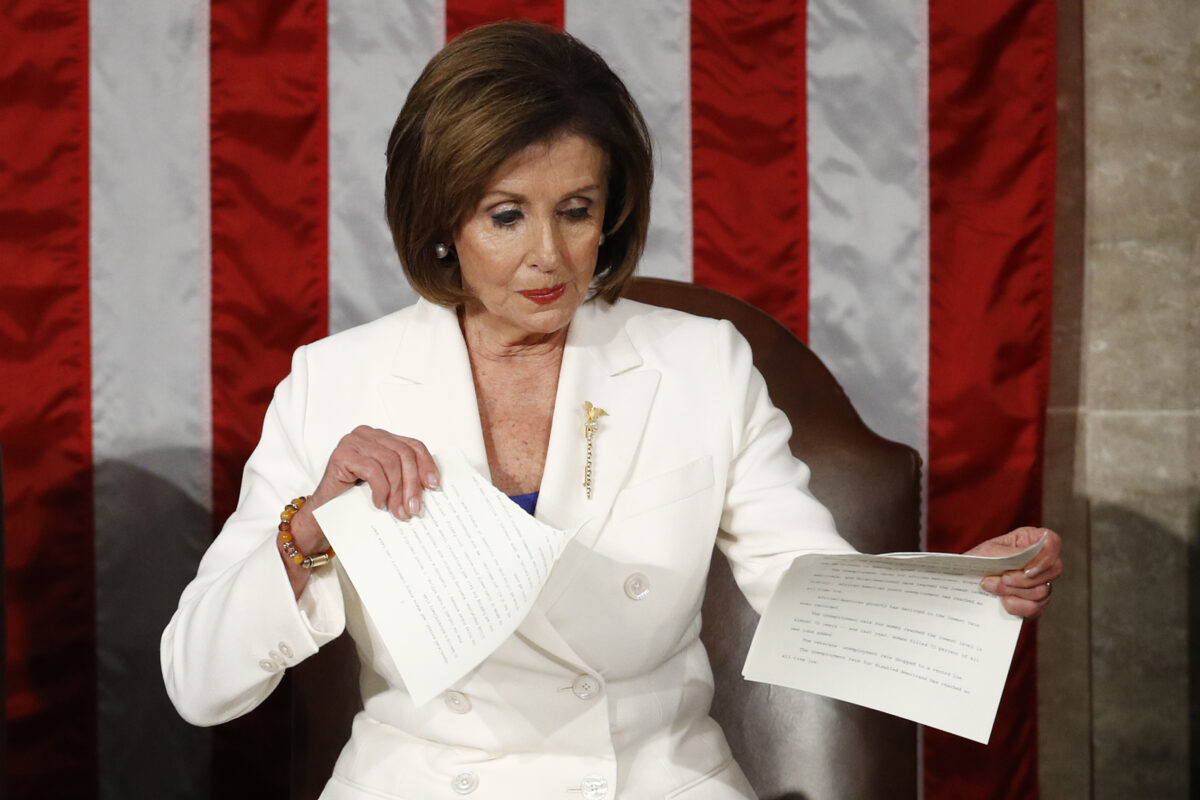 Democrats have no idea how to get a handle on their “Nancy Pelosi” problem.

And now Nancy Pelosi shot Democrats in the foot with this humiliating mistake.

Nancy Pelosi has made a spectacle of herself during the last two State of the Union addresses given by President Donald Trump.

During 2019’s State of the Union address, Pelosi was filmed giving Trump a very rude and sarcastic clap that turned into an internet sensation.

Liberals everywhere applauded her for sticking it to Trump.

But the childish display was a show of blatant disrespect to the office of the President of the United States.

And this year, Pelosi outdid herself with yet another childish display of defiance.

This address followed his victory against the extreme left’s farce of an impeachment trial where they attempted to impeach the President in a baseless trial.

Pelosi thought she had won when the Democratic-held House voted to approve two articles of impeachment against President Trump.

But her world came crashing down when the Republican-held Senate voted to acquit him of all charges and clear his name of the Democrats’ lies.

Pelosi had schemed and manipulated throughout Trump’s entire presidency to attempt to remove him from office.

She even went as far as to act like she was against impeachment for years.

“I’m not for impeachment. Unless there’s something so compelling and overwhelming and bipartisan, I don’t think we should go down that path, because it divides the country and he’s just not worth it.”

But Pelosi seemed to do a complete 180 following this statement and called for the President’s impeachment.

But after a long, drawn out trial in both the House and the Senate, Pelosi and her entire party have been defeated. Trump proved that he has the loyalty of the American people and is here to stay.

But Pelosi made one final act of defiance before admitting defeat.

Following the President’s State of the Union address, Pelosi can be seen in the background very dramatically tearing apart a paper copy of Trump’s speech.

After a Senate trial during which President Trump’s numbers only went up, Pelosi sat in the Speaker’s chair last night realizing that Democrats had lost political momentum to Trump. She grimaced throughout the speech, shook her head and refused to even applaud a fourth-grader in the audience who was awarded a scholarship so she attends a better school.

After she was captured ripping up Trump’s speech on national TV, Pelosi explained her action as “the courteous thing to do considering the alternatives.” For political observers, it looked more like an exercise in frustration by a political leader who rejected a smarter alternative in resisting impeachment. Now she and her party have surrendered the upper hand to President Trump.

Pelosi knows that she and her party are done for. All of Trump’s hard work to rid Washington of the left’s tyrannical power is finally paying off.