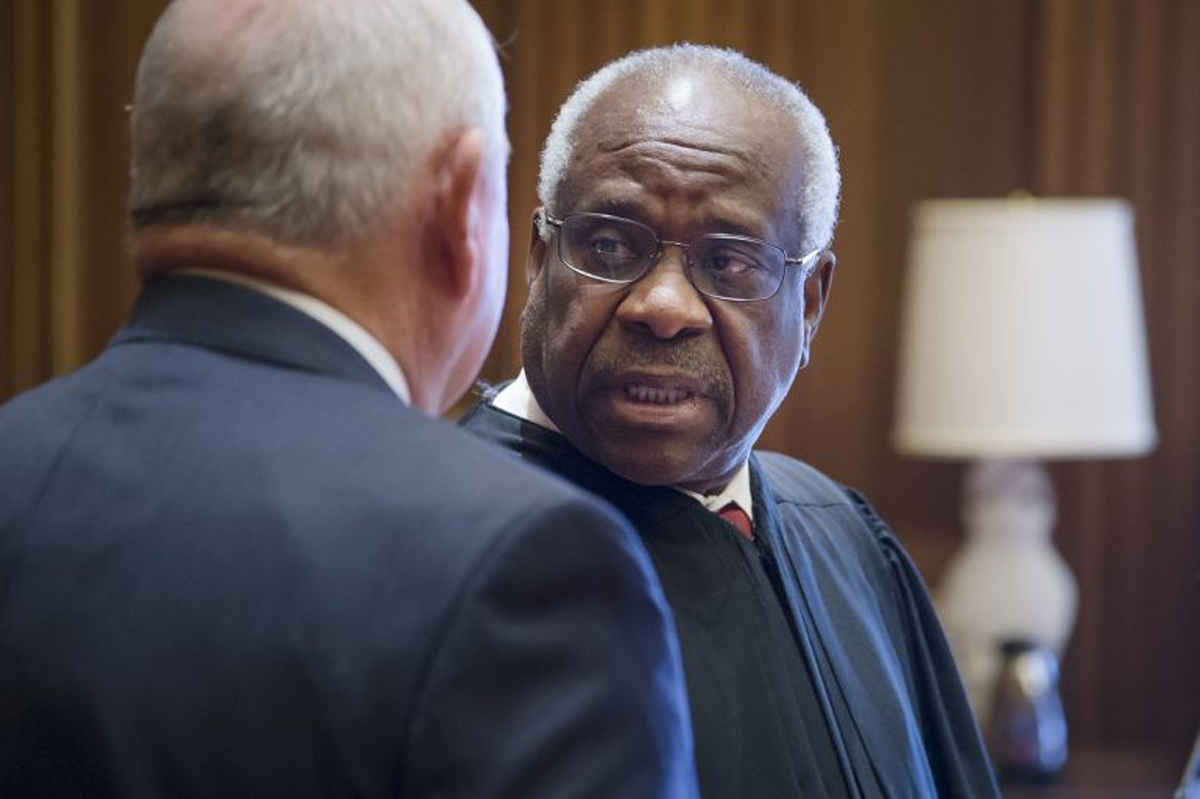 Democrats tried to destroy Clarence Thomas with a smear campaign during his confirmation hearings because they were afraid this day would come.

Thomas is now the leader of the court’s conservative majority.

And Clarence Thomas has some bad news that will make every Democrat furious.

Justice Thomas wrote a concurring opinion in a six to three Supreme Court decision upholding the right of judges to sentence juveniles to life in prison without parole for the crime of murder.

But it was not Thomas’ opinion that attracted attention.

Instead it was a footnote where Thomas laid down a future marker by calling out the left’s hypocrisy.

Thomas wrote a footnote where the most senior justice on the Supreme Court took aim at how the left manipulates language to deceive the public into thinking the Democrat Party’s radical policy proposals were reasonable and moderate.

In the footnote, Thomas cited the 1997 case Lambert v. Wicklund which dealt with a similar issue; liberal justices referred to the offender as a child.

“The Court’s language in this line of precedents is notable. When addressing juvenile murderers, this Court has stated that ‘children are different’ and that courts must consider ‘a child’s lesser culpability,’” Thomas wrote.

Thomas compared that to how left-wing justices referred to minors in the Planned Parenthood of Southeastern Pa. v. Casey and the Ohio v. Akron Center for Reproductive Health abortion cases.

In those cases, Thomas wrote that pro-abortion justices tried to confuse the issue by referring to the juvenile females as “young women.”

“And yet, when assessing the Court-created right of an individual of the same age to seek an abortion, Members of this Court take pains to emphasize a ‘young woman’s’ right to choose.It is curious how the Court’s view of the maturity of minors ebbs and flows depending on the issue,” Thomas wrote.

Clarence Thomas is the most senior justice on the Supreme Court.

Thomas has served for 29 years now and has dismissed any speculation that he plans to retire claiming he still plans to serve for decades on the Supreme Court.

Many believe that a major part of Thomas’ motivation to stay on the Supreme Court into his 90s would be to write the opinion that overturns the outrageous Roe v. Wade decision that legalized abortion on demand across America.

Over the past several years—as Donald Trump transformed the Court into a six to three Republican-appointee majority—Thomas expressed an increasing frustration that his fellow justices will not take on the issue of abortion.

The other conservative justices on the Supreme Court have yet to show the courage to take on Roe.

But Clarence Thomas is making it clear to everyone that he intends to send that disastrous decision to ash heap of history.